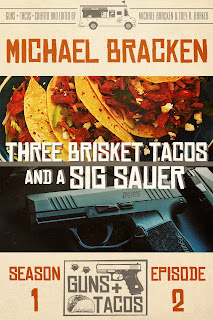 Three Brisket Tacos and a Sig Sauer, the second episode in the Guns + Tacos serial novella anthology series created and edited by Trey R. Barker and me, releases August 1.

Joseph “Joey D” Garrett owes everything to his Aunt Sylvia, including a stint in the Stateville Correctional Center. When he’s released, Joey returns to the only life he knows, and he soon becomes an instrumental part of his aunt’s plan to rob four banks in a single day.

Before that can happen, though, Joey meets Gloria Sanchez, and she turns his life upside down. Gloria’s everything his aunt isn’t, and their developing relationship makes him think about how life could be if he weren’t so dependent on Sylvia. When he’s forced to choose between the two most important women in his life, Joey finds the answer in a take-out bag from a taco truck.

The Eyes of Texas 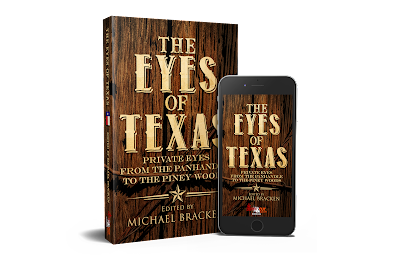 The Eyes of Texas, an anthology I edited, featuring 17 private eye stories set in Texas, releases just before the Dallas Bouchercon. Read the official press release:

TAMPA, Fla. - July 17, 2019 - PRLog -- Down & Out Books is pleased to announce that THE EYES OF TEXAS: PRIVATE EYES FROM THE PANHANDLE TO THE PINEY WOODS edited by Michael Bracken will be published on October 21, 2019 in trade paperback and ebook formats.About THE EYES OF TEXAS …Texas has it all, from bustling big cities to sleepy small towns, and law enforcement alone can't solve every crime. That's where private eyes come in. They take the cases law enforcement can't—or won't. Private eyes may walk the mean streets of Dallas and Houston, but they also stroll through small West Texas towns where the secrets are sometimes more dangerous. Whether driving a Mustang or riding a Mustang, a private eye in Texas is unlike any other in the world.The Eyes of Texas features seventeen original tales of Lone Star State private eyes from Trey R. Barker, Chuck Brownman, Michael Chandos, John M. Floyd, Debra H. Goldstein, James A. Hearn, Richard Helms, Robert S. Levinson, Scott Montgomery, Sandra Murphy, Josh Pachter, Michael Pool, Graham Powell, William Dylan Powell, Stephen D. Rogers, Mark Troy, and Bev Vincent.Meet the editor …Michael Bracken, an award-winning writer of fiction, non-fiction, and advertising copy, has received multiple awards for copywriting, two Derringer Awards for short fiction, and the Edward D. Hoch Memorial Golden Derringer Award for lifetime achievement in short mystery fiction. The author of several books and more than 1,300 short stories, he has edited six crime fiction anthologies and provides editorial services to book and periodical publishers.Michael regularly speaks about writing, editing, and publishing at conferences, conventions, and corporate seminars, and has taught non-credit courses for writers at Southern Illinois University at Edwardsville. He's been a guest speaker in classrooms at various universities, including Baylor University and University of Mary Hardin-Baylor.He received a Bachelor of Arts in Professional Writing from Baylor University and currently serves clients and publishers from his office in Hewitt, Texas.In its ninth year as an independent publisher of award-winning literary and crime fiction, Down & Out Books (https://downandoutbooks.com) is based in Tampa, Florida. For more information about the book, to request a review copy of the book, or to inquire about an interview with the editor, contact info@downandoutbooks.com.
Posted by Michael Bracken at 5:11 PM No comments:

Brian Drake interviewed me about Guns + Tacos, which launched today. I explain how an offhand comment from co-creator and co-editor Trey R. Barker led to this new novella anthology series from Down & Out Books:

Posted by Michael Bracken at 7:00 PM No comments: