Will it go 'round in circles? Uh-huh! 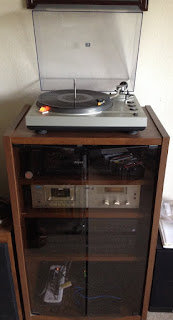 Many years ago, when I was in my early 20s, one of my first expensive purchases was a component stereo system from JCPenny that included a receiver, turntable and cassette tape player. During subsequent decades, the receiver failed and was replaced, two different CD players were added, and I blew out of one the original speakers. (I later blew out one of the replacement speakers and now have a mismatched set. Alas, the remaining original speaker now needs to be replaced.)

For the past ten years or so, the system had been stored in a bedroom closet, in part because the turntable belt had broken and I had a small self-contained CD player I could use to listen to music. My LPs, 45s, and cassette tapes were also hidden away because without the stereo I had no way to play them.

A few years back I attempted to purchase a new belt for the turntable, and either purchased the wrong one or installed it incorrectly because the turntable still didn't work. I shoved the stereo system back into the closet.

My recent move resurrected the system and there is a place in my new office where it fits perfectly. So, I once again went in search of a new belt for the turntable. This attempt was a success, and I've since been listening to LPs I had forgotten I owned. (For example: That's Freddie Bell and the Bellboys playing in the picture. Remember them? Neither do I.)

There's an entirely different vibe in my office when LPs are on the turntable than when CDs are playing. I'm wondering what it'll be like after I've worked my way through all the albums and 45s and start playing my cassette tapes.
Posted by Michael Bracken at 11:23 AM

Michael, I agree that CDs just aren't the same as LPs. I always loved the little scratching sounds. :-) One thing I've noticed, though, is how often you have to get up and change the record, compared to the length of CDs these days.

We're eventually putting all of our vinyl onto CDs so we can listen to them in the car, etc. and clear out some storage space. Good for you for keeping your turntable turnin'!

All of my cassettes just sort of withered away; I guess the heat got to them.

Of course, my son wonders why I have music in any tangible format when I could just listen to it on my iPod or sign up for a streaming service such as Pandora. I grew up when artists made a musical statement, creating entire albums (10 or so songs) that fit together in a particular way. Some artists today don't create that way. They think in terms of singles.