I completed and submitted my twentieth short story of the year this evening, a 2,000-word confession I began May 11, 2010.

A glance at my records shows that I'm falling behind in production, but my acceptances for the year are on track.
Posted by Michael Bracken at 6:33 PM No comments:

The Digest Enthusiast, Espionage, and Me 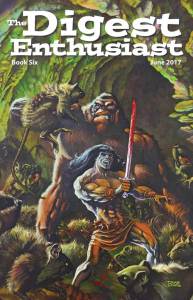 The sixth issue of The Digest Enthusiast arrived in yesterday's mail, and I'm looking forward to diving into it soon. I've read almost every word in the first five issues and am expecting to do the same again.

One of the things that has me devouring each issue is the realization that my writing career is entwined with the digests. My first professional short story sale in the late 1970s was to a digest-sized children's magazine (Young World), my third professional mystery sale was to a digest (Mike Shayne Mystery Magazine), and my stories have since appeared in several current and now-defunct digests (Alfred Hitchcock's Mystery Magazine, Ellery Queen's Mystery Magazine, Espionage, and more). I even have a story coming out next year in Weirdbook, a publication I first sold to in 1990 when it was a full-size publication, but which has been resurrected as a digest.

One category of digests not yet covered by The Digest Enthusiast is the sex digests, which I wrote for early in my career, and which provided me with an opportunity to contribute to Espionage.

The sex digests had titles such as Chic Letters, Hustler Fantasies, Letters, Turn-On Letters, Uncensored Letters, and so on. The primary content of these publications were "true" letters from "readers" describing their sexual encounters. Some of these digests were low-budget affairs containing little else but letters and others were more like their full-sized men's magazine counterparts, with photographs and actual short stories and articles. I wrote for both kinds. 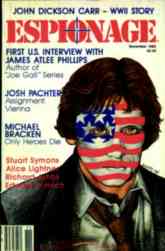 Which is how writing for the sex digests gave me an "in" with the editor of Espionage. Jackie Lewis, the editor/publisher of Espionage, and her twin sister Jeri Winston, the associate publisher, are Bob Guccione's sisters. (You should recognize him as the publisher of Penthouse.) Prior to starting Espionage, Jackie and Jeri published a great many sex digests, and Espionage may have been their attempt to go legit.

At that point I had already placed a few mystery short stories in other publications (Mike Shayne, for one), and I was a regular contributor to the sex digests Jackie Lewis edited. Even though I was an unknown--compared to many of Espionage's other contributors--Jackie purchased my stories and splashed my name on the covers as if it meant something.

Learn a little more about Jackie, Jeri, the digests they published, and the start of Espionage: http://articles.chicagotribune.com/1985-02-22/features/8501100834_1_bimonthly-publication-penthouse-science-fiction

I received my 25th acceptance of the year this afternoon. This one's for a reprint of a story first published in Mike Shayne Mystery Magazine.
Posted by Michael Bracken at 5:01 PM No comments:

My story "Wedding Day Disaster" appears in the June issue of True Story. My stories "Baseball Daddy" and "Summer Skeevy" appear in the June True Confessions.
Posted by Michael Bracken at 3:22 PM No comments:

I completed and submitted my nineteenth short story this year. This one's a mere 1,100-word bit of crime fiction, begun September 10, 2016.
Posted by Michael Bracken at 8:04 AM No comments:

I completed and submitted my eighteenth short story of the year this evening. This one's a 3,000-word mystery.
Posted by Michael Bracken at 7:41 PM No comments: