I just stumbled across Ben Macnair's Booklore review of Haunted (BooHoo Books), an anthology published in 2014 that contains my story "Little Spring." He had this to say about my story:


Michael Bracken’s Little Spring is a love story that crosses the widest divide of all. Set in America, it follows love-lorn Shelby Paulson, who finds her perfect home and lover after her marriage ends. Unfortunately her new partner is already late.

And he closes the review with this assesment of the collection:


This is a fine collection of stories by a cast of talented writers, and although there is nothing really horrific in the book, the stories can certainly set an atmosphere.

Read the entire review here.
Posted by Michael Bracken at 1:23 PM No comments:

My story "Last Good Day" is the story of the week at Tough:http://www.toughcrime.com/2017/07/last-good-day-by-michael-bracken.html
Posted by Michael Bracken at 6:56 PM No comments:

I received my 27th acceptance of the year this evening. This for the crime fiction story I submitted Friday.
Posted by Michael Bracken at 6:53 PM No comments:

I completed and submitted my twenty-second short story of the year this evening. This one's a 5,300-word bit of crime fiction.
Posted by Michael Bracken at 9:59 PM No comments:

I suspect this streak won't last much longer. Though I have stories scheduled for publication in August, September, and October, several of my regular markets have died during the past few years, a few more are displaying unhealthy symptoms, and I've not yet found new publications or anthology editors to replace those I've lost or may be losing.

I have cracked new (or new to me) markets recently, but none have yet shown a desire to publish the volume of material I had been placing previously. So it goes.
Posted by Michael Bracken at 6:45 PM 2 comments:

Noir at the Salad Bar 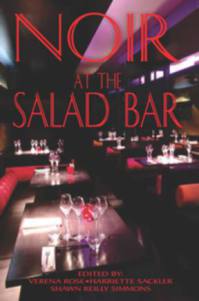 Noir at the Salad Bar, Culinary Tales with a Bite is a crime fiction anthology featuring gastronomic mysteries. Inside are dark and varied tales with a common theme of food and drink. The contributing writers represent a mix of bestselling authors, brand new voices, and seasoned professionals from the crime writing community. Bon Appétit!

Among the 30 stories is my "Smoked."
Posted by Michael Bracken at 6:20 PM No comments:

I received my 26th acceptance of the year today, this time for a private eye story.
Posted by Michael Bracken at 5:31 PM No comments:

I finished and submitted my twenty-first short story this year. This one's a 7,200-word private eye story I started July 5.
Posted by Michael Bracken at 8:21 PM No comments:

Leo Margulies and the grandchildren of the pulps

Philip Sherman's Leo Margulies: Giant of the Pulps (Altus Press, 2017) is a mixture of biography and history of the pulps that never quite commits to either but is fascinating nonetheless.

What most intrigued me was how writers of my generation owe a debt of gratitude for what Margulies accomplished, even though many of us aren't quite old enough to have written for the pulps. The writers we admired and who, directly or indirectly, served as our mentors had long careers writing for the pulps, and we looked up to them as role models.

When they touched our lives, though, we had a direct connection to the past even if we may not have realized it at the time. Robert Bloch, for example, once wrote a brief article for Knights, a science fiction fanzine I published during my late teens and early twenties.

Dennis Lynds, writing as Michael Collins, contributed "The Horrible, Senseless Murders of Two Elderly Women" to Fedora: Private Eyes and Tough Guys (Wildside Press, 2001), my first anthology. His story was nominated for an Edgar Award, which I believe was his last nomination prior to his death in 2005.

He also passed my name along to Jeff Gelb, who invited me to contribute to his and Max Allan Collins's Flesh and Blood: Guilty as Sin (Mysterious Press, 2003). My story, "Feel the Pain," was selected for inclusion in Maxim Jakubowki's Best New Erotica 4 (Carroll & Graf, 2005), my first ever appearance in a best-of-year anthology; Gelb then invited me to contribute to his and Michael Garrett's Hot Blood: Strange Bedfellows (Kensington, 2004); and "Moe Ron" Boyette, the protagonist of "Feel the Pain," appeared in a handful of additional short stories.

Margulies also indirectly impacted my writing career by founding Mike Shayne Mystery Magazine. Many crime fiction writers of my generation sold their first stories to MSMM before and after his involvement with the publication. My first appearance in MSMM, my third mystery short story sale, came well after Margulies's death. Charles Fritch was editor by the time "Vengeance to Show in the Third" appeared in the October 1983 issue, and I went on to place three more stories (my fourth, fifth, and seventh mysteries) in the magazine before it ceased publication.

So, even though I never wrote for the pulps, I think I can lay claim to being a grandchild of the pulps.